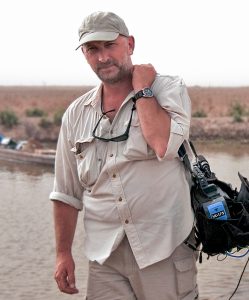 At the time I was already an experienced amateur diver, and had become involved with the excavation of the wreck of King Henry VIII’s flagship Mary Rose shortly before attending college. This proved the start of a huge adventure that has extended across my whole life to this day.

I became the Mary Rose Trust staff photographer in the significant period between 1982-83, which saw the successful raising of the ship’s hull. This was, and still is, a unique project, and to have been so deeply involved and to have contributed my part is something I remain immensely proud of to this day.

In 1983, I was given the opportunity to move into the world of television, working as an assistant to Tim Johnson, the cameraman who shot all the films on the Mary Rose for the BBC Chronicle series.

We were soon on the road travelling to Kenya to film a Natural World film about soil erosion, which was swiftly followed by a film about the America’s Cup series of yacht races in Newport, Rhode Island. This series saw Australia gain the America’s Cup from the Americans… representing the latter’s first defeat in 134 years, so what a great summer that was!

Over the next 3 years, we made numerous films, principally about boats and diving. It was a great time.

In 1986, I made the move to become a cameraman in my own right, and began filming for a wide range of programmes that included Timewatch, Crimewatch, That’s Life, The Heart of the Matter, World in Action, Brass Tacks, along with many more. All of these programmes were shot on 16mm film. I also did a fair amount of work filming underwater shots for some of the top TV dramas of the day, including the seminal under the lake, Colin Firth swim scene in the 1995 BBC adaptation of Pride & Prejudice.

During the 1990s, my work revolved heavily around current affairs programmes, such as The Big Story. In 1996, I moved over to World in Action where I worked regularly for a couple of years, before finding myself working on the BBC’s flagship current affairs programme, Panorama. I became a regular cameraman on the latter for over 20 years, and worked on programmes which were nominated or won awards at RTS, BAFTA, Grierson and the Broadcast TV awards during my time there.

Over recent years, I have worked on various documentaries, the most notable, perhaps, being a series of films about Brexit, working alongside Patrick Forbes from Oxford Films.

My career has taken me to over 75 different countries, and I have worked in some pretty difficult places, from war zones to rain forests. Throughout these adventures I have continued to use my stills camera. My pictures have been published globally, and some of the finer examples are to be found in the photography section of this website.